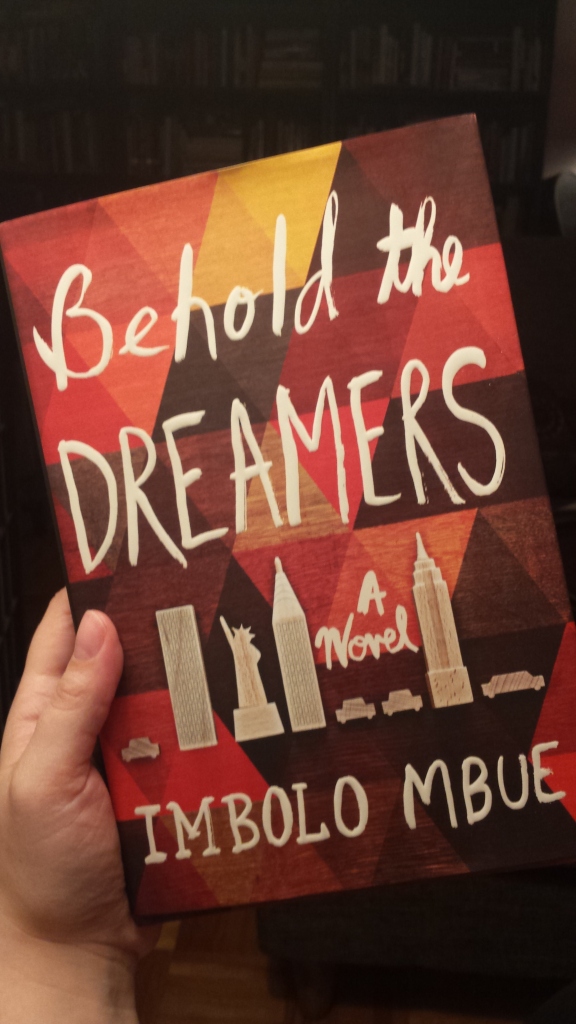 Behold the Dreamers by Imbolo Mbue

Behold the Dreamers takes place in New York City in 2008. The story opens as Jende Jonga gets a job as a chauffeur for Clark Edwards, a Lehman Brothers executive. Jende is thrilled to have landed such a good job after bringing his family over to America from Cameroon. His wife, Neni, has a student visa and is studying to become a pharmacist and is hired for some temporary work by Clark’s wife, Cindy. Jende and Neni work hard to make the life they have dreamed of for themselves and their young son a reality. But when Lehman Brothers goes bankrupt, and the recession begins, things change quickly and dramatically for both the Edwardses and the Jongas.

The story examines themes of race and class, about identity and how much our identity is tied with place. It’s about the quest for home and belonging. It’s also about the struggles families, couples and individuals face behind closed doors.

Before purchasing this book, I’d seen the title on a few lists previewing books for the fall. I’ve been reading a lot of Canadian literature lately, and I wanted to read a story from the perspective of a different culture.

Mbue does a masterful job of creating a sense of empathy for the characters in this book. The pressures Jende feels to provide for his family in New York and for his family back in Cameroon, Neni’s struggle with deciding what is the right thing to do as a mother, Cindy’s inner turmoil–I felt like these were real people and not fictional characters. There is a scene between the Jongas’ son, Liomi, and Neni after Neni has been to a parent-teacher meeting. The description of how Liomi feels as Neni lectures him felt very real, and I wanted to reach out to Liomi to give him a hug.

The major events in this book–the recession, the Lehman Brothers going bankrupt, Obama getting into office–are all from recent history. It was interesting to read about these things with just a few years’ perspective, to be able to remember them from reality and to anticipate what will happen in the novel.

This is a good choice for readers who want something more realistic than a feel-good story of people settling in America and living the American dream. It’s also a book for fans of literary fiction: The story focuses on the emotional challenges and intellectual struggles the characters experience.

There were plenty of mentions about African food, such as fried plaintains and puff-puff. I haven’t eaten either, but I’ve since looked up what puff-puff is, and it sounds like a more delicious version of a doughnut. So while I haven’t eaten it myself, I’d say puff-puff seems like the perfect snack to enjoy while reading Behold the Dreamers.

2 thoughts on “Behold the Dreamers: a fantastic debut novel”