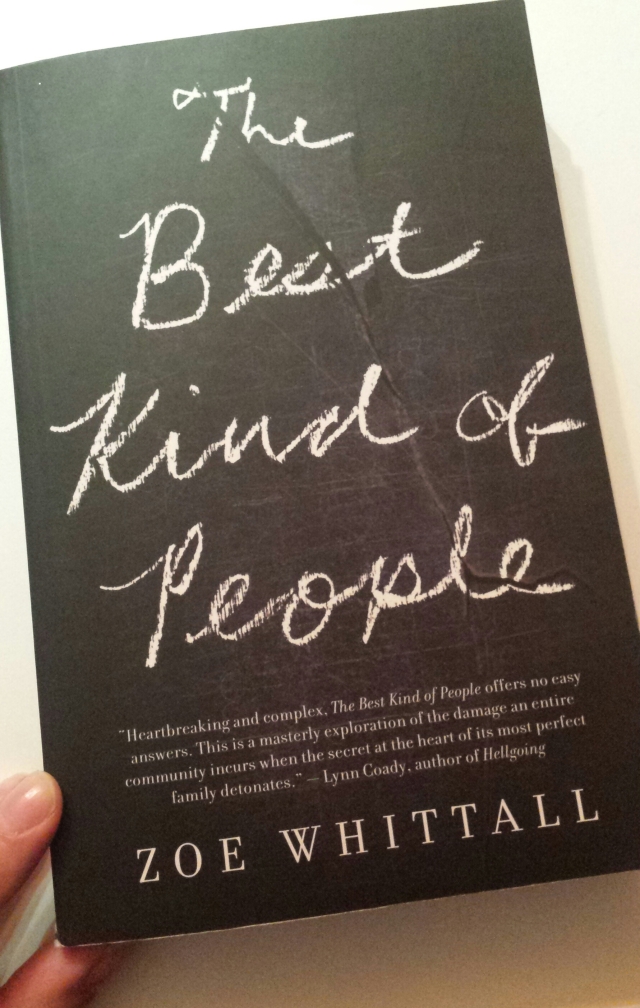 The Best Kind of People by Zoe Whittall

The Best Kind of People is set in modern-day America and tells the story of a family whose patriarch, George Woodbury–a well-respected and admired schoolteacher–has been accused of sexual misconduct. But instead of telling the story through George’s perspective, or through the victims’, the novel looks at how George’s family and the community are affected.

Written in the third person, The Best Kind of People moves between the perspectives of George’s wife, son and daughter. The novel examines the complex feelings and thoughts the family experiences and also looks at the reactions of the community and media that the family must face.

In addition to the intriguing premise, I wanted to read The Best Kind of People since I’ve also read Whittall’s first novel, Bottle Rocket Hearts, and liked her writing style.

The Best Kind of People was already receiving quite a bit of buzz–and had made it onto the 2016 Giller Prize longlist–by the time I picked up a copy from House of Anansi’s tent at Word on the Street. The day after the festival, it was announced that the book made the shortlist (as did Emma Donoghue’s The Wonder, which I’ve also read and reviewed.)

If Whittall had written this novel from the point of view of George or of the victims, it would have been a different book entirely. What makes this story so interesting is that we get to hear the voices of those we don’t usually hear from, whether that be in other books or in the news. There is a lot of inner conflict that’s explored here: the complex feelings and thoughts that each family member deals with. But the book also shows how those feelings and thoughts can vary for each family member. I couldn’t stop reading this one.

This is a book for lovers of literary fiction. You’ll want to read it if you like delving into the minds and hearts of characters and going on their intellectual and emotional journeys. There are, of course, events that happen along the way, but what Whittall does so well is illustrate the inner struggles experienced by the characters. It’s one of those books that asks more questions than it provides answers.

I recommend my old standby: a good cup of tea. I just hope yours is better than some of the tea references that I can recall in this book (an unappetizing cup of herbal tea, or a cuppa that’s been steeped for too long and is undrinkable). So choose your tea wisely–and brew it properly.