The Toronto skyline is constantly changing.

My neighbourhood is changing. For one thing, a building is going up next to mine. It won’t directly obstruct my view, but if I stand at my window and turn my head to my right, there it is: a large piece of concrete staring back at me.

I used to be able to see the CN Tower in its entirety when I looked in this direction. I liked seeing which colours lit up the tower each night before I closed the curtains and got into bed. But it’s almost completely gone from view now.

Why do I care so much? After all, the view is the same when I look straight ahead. And, really, the CN Tower can be seen pretty much anywhere in this city.

It might just be nostalgia. I’ve lived in this neighbourhood for more than five years, and very little seems to stay the same. You get used to something, and then it changes. The city never takes a break. It never just lets itself be. 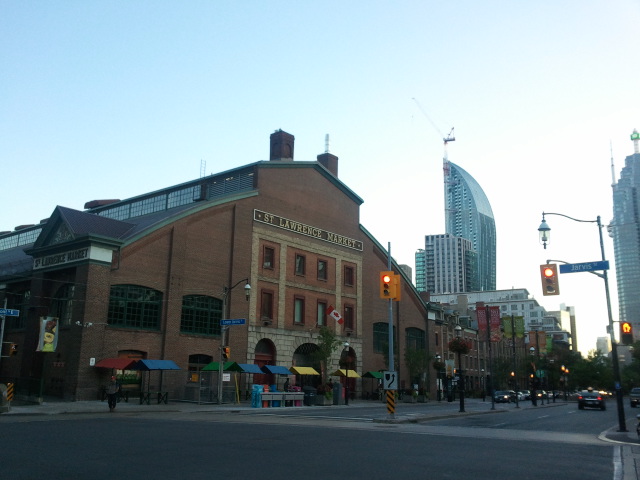 The historic St. Lawrence Market with the not-yet-finished sleek L Tower to the right.

It’s similar to language. New words are added to our lexicon all the time, and when they are added to the dictionary, some people find it harder to accept than others.

Recently, Oxford Dictionaries announced a list of words that were added to OxfordDictionaries.com (which is different from the OED). I know some people who are having a hard time accepting that words such as adorbs, humblebrag and mansplain have become a part of our lexicon. (Personally, I’m happy to have a more reliable source than Urban Dictionary to define some of these terms for me.)

If you’re someone who is uncomfortable with these additions, don’t worry. If you want to say crazy instead of cray, you can. Because even if there comes a day when people stop saying crazy, there will still be a place for it in the dictionary where its definition can be looked up. When words are added into the dictionary, nothing is taken out to make room. There’s space for both the old and the new.

Conversely, changes in our physical settings come and go. Buildings are knocked down, turned into parking lots and then built upon again. It can be difficult to keep track of everything. Sometimes it’s easy to forget what stood in one place before something new came in.

When I look out my window and see that changing view, I’m watching something being built, but I’m also watching something disappear. Maybe there will come a day when I forget about my ritual of checking the colour of the tower’s lights. I suppose I’ll have to rely on photographic evidence to remind me of what I once saw.

It’s all part of a bigger picture, I suppose—just as language is fluid, so is the city. And like our lexicon, the city will forever be reinventing itself, always developing, never complete.

2 thoughts on “The changing landscape of language”