I heard about the Larkin Trail a few years ago, when it was first created, but I didn’t think I’d actually explore it myself. When would I ever be in Hull? But then this year I planned to spend some time in London, and Hull was just a 2.5-hour train ride away, so it made sense to go for a few days to follow in the footsteps of my favourite poet, Philip Larkin.

Before leaving the train station, I was greeted by the poet himself. Well, I was greeted by a statue of him, at least (since Larkin died in 1985, it would have been a little creepy if he himself had been there).

I arrived too early to check in to the hotel, so I dropped off my bag and headed out to explore. The trail is self-guided and consists of 25 landmarks that link to Larkin’s poetry or to his personal life. The hotel I stayed in is actually part of the trail. It’s one of the reasons I chose to stay there (the other reason was its close proximity to the train station: they’re attached). The lobby of the hotel is the setting for Larkin’s poem “Friday Night at the Royal Station Hotel.” 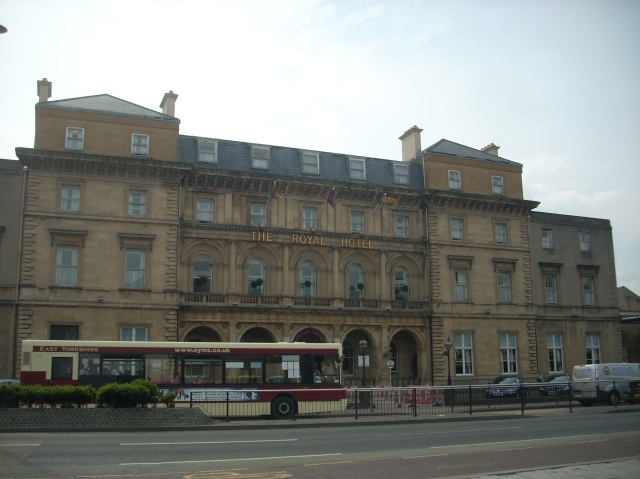 sign at the main entrance to the Mercure Hull Royal Hotel

It was a beautiful afternoon when I arrived. Lots of people were out and about, probably because of the weather and also because some were on their lunch breaks. 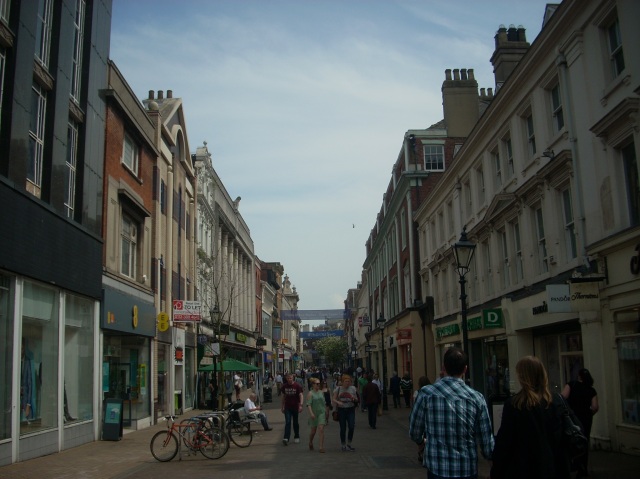 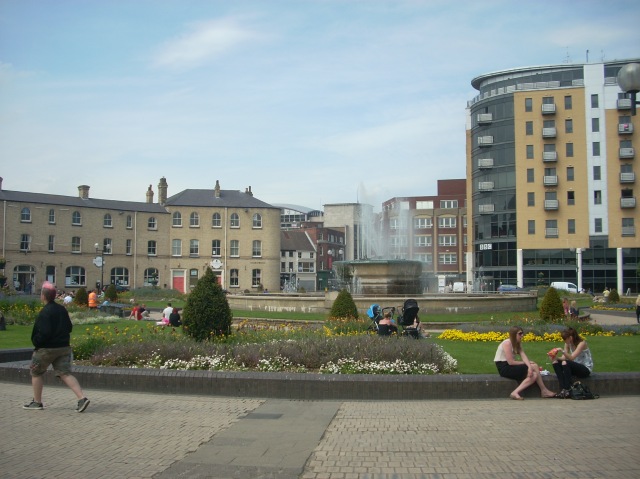 After visiting the tourism office, I sat down in My Cup of Tea Tea Room to peruse my Larkin Trail brochure over tea and tiny sandwiches. The 1940s-style tea room isn’t huge, and I was by far the youngest person in there. Only a few tables were taken, and their occupants were all ladies who looked to be in their 70s or older. Frank Sinatra’s voice filled the air. Perhaps I wasn’t their target demographic, but I found it pleasant.

The trail is divided into three parts. Before I arrived in the city, even before I left Canada, I knew I wouldn’t complete the last portion. That’s because it involves going to other towns surrounding Hull, and I’d need a car. I didn’t feel confident enough about driving in an unfamiliar city on the other side of the road (and, actually, it has probably been a couple of years since I’ve driven at all), so I decided early on that I would do only the first two parts, which focus on the city centre and the area beyond the city centre.

A few of the landmarks located in the city centre include the Marks & Spencer store that inspired Larkin’s poem “The Large Cool Store”; Victoria Pier, where Larkin would catch the ferry before the Humber Bridge was constructed; and a couple of pubs where he listened to live jazz (Larkin was also a jazz critic).

Ye Old Black Boy Pub is the oldest pub in Hull, dating back to 1729. It’s also one place where Larkin liked to listen to jazz.

Another landmark is Hull’s city hall. This is where Larkin would attend concerts. It’s also the venue that inspired his poem “Broadcast.” I carried my copy of Larkin’s Collected Poems in my purse as I explored Hull, and wherever a sign mentioned that a certain location was linked to a specific poem, I’d pull out the book, find the poem and read it there, in the presence of the place that inspired it. 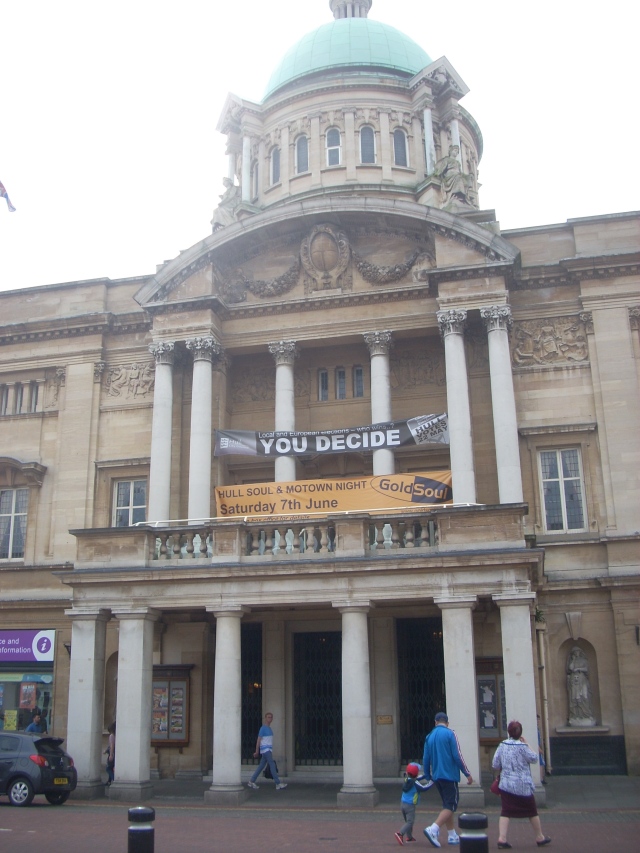 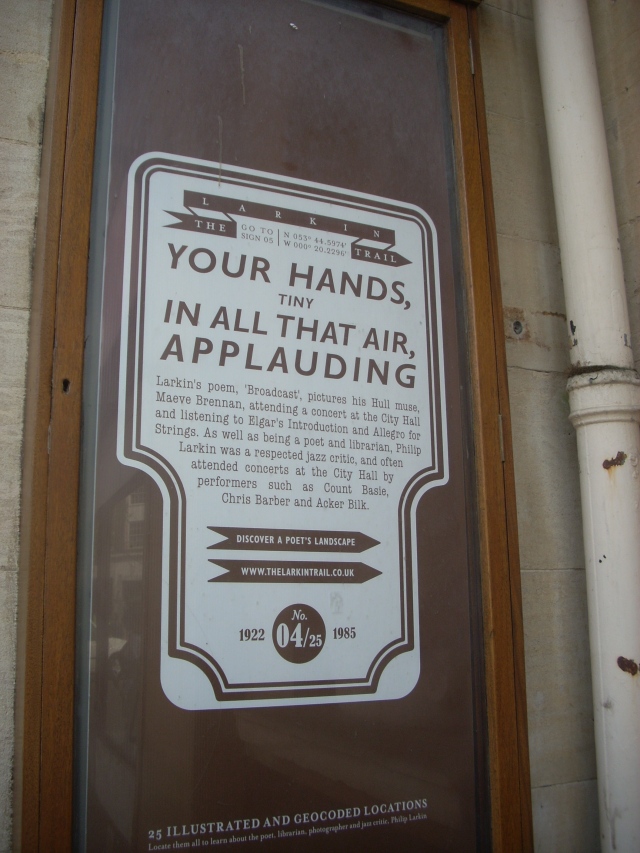 Larkin is not the first or last well-known poet to come out of Hull. Another quite famous poet from the city is the great 17th-century writer Andrew Marvell. Marvell was also at one time Hull’s member of Parliament. 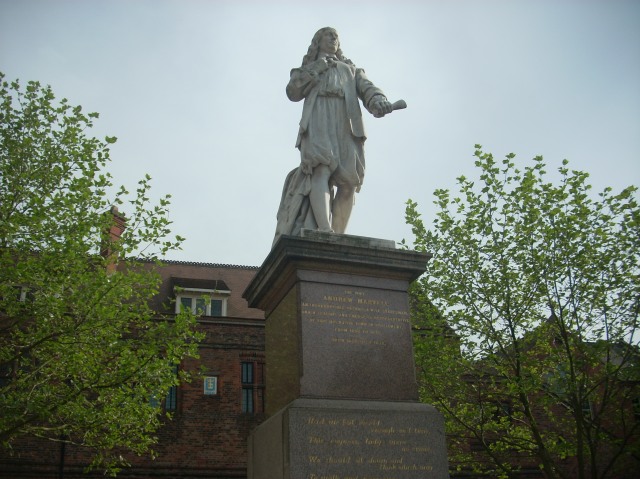 sign across the street from the Andrew Marvell statue

By the time evening rolled around (and I mean early evening, maybe 5:30 or 6:00 p.m.), businesses and even many restaurants closed. I watched as people got on buses, heading home, I assumed. Downtown became much quieter. I continued walking for a while, though, finishing the city centre landmarks that first day.

The next day focused on the second part of the trail, the area beyond the city centre. These landmarks were spread out over a larger geographical area, which meant more walking, and that suited me just fine. It was nice to see some of city outside of the downtown. 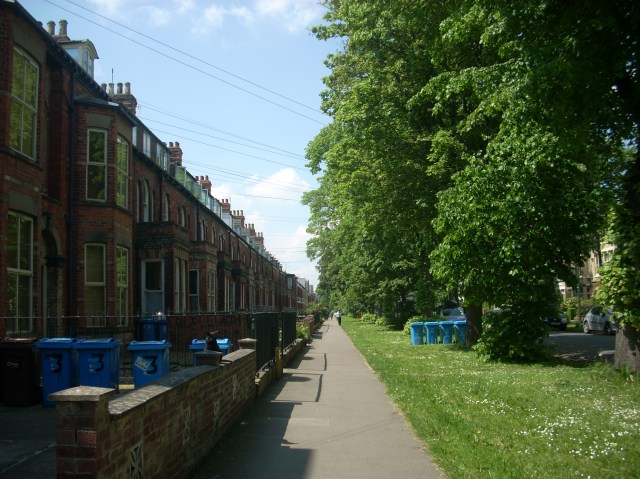 walking around beyond the city centre

One of my favourite stops on the trail was the General Cemetery. The cemetery was a beloved spot of Larkin’s where he liked to take walks and think. He referred to the cemetery as “a natural cathedral.” When he was being photographed for the album sleeve of him reading his book The Less Deceived, Larkin chose the General Cemetery as the location for the photo shoot.

The sign is at the entrance to the cemetery.

I’ve always liked walking in cemeteries for their peacefulness, but this one was special not only for the Larkin connection, but also for how lush and beautiful it was. The particular day and time might have helped, too, as the sun was shining, and it was impossible to ignore the sounds of so many birds singing. 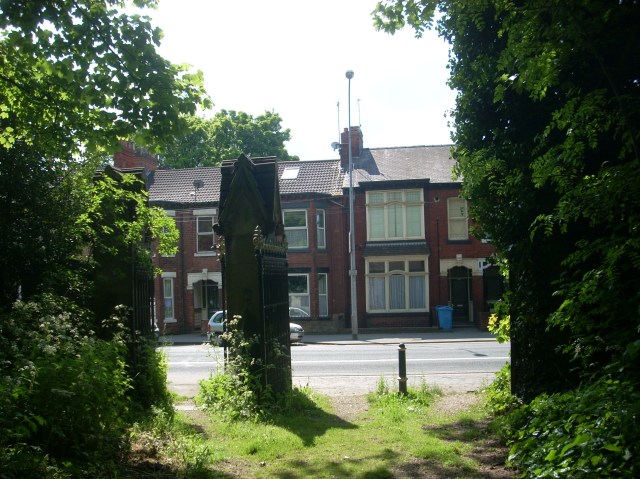 just inside the cemetery, looking out toward the road 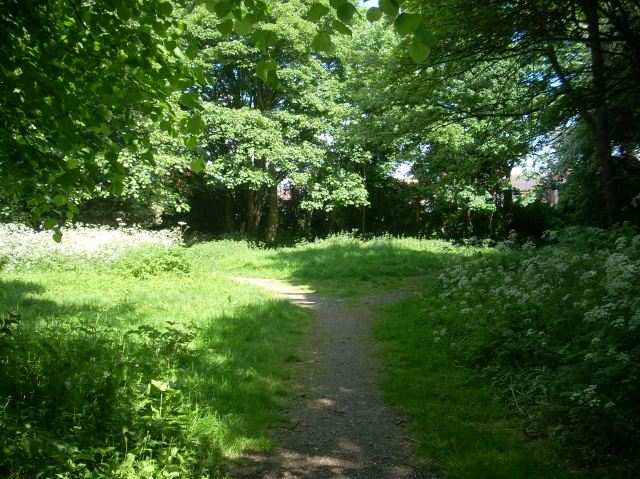 I made my way up to the University of Hull, where Larkin worked as a librarian for 30 years.

As I moved through the trail, I noticed that while the signs have a similar design, they are all a little bit different, especially in size. Sometimes it was difficult to know exactly where to look for them, as some are quite low to the ground and others are higher up. I wasn’t able to find the sign for the Brynmor Jones Library outside of the library because of the renovations that were underway. I went inside to ask the librarians about it. They didn’t seem to know if the sign had been temporarily removed or if it was covered up at the moment. But they looked up an image of the sign on Google for me (which I realize I could have done anywhere, even back home in Toronto, but I appreciated the effort).

Another sign I came across was also covered, although in a different way. This was the sign in Pearson Park, marking the park close to the apartment Larkin once inhabited. I couldn’t make out everything it said because graffiti covered some of the text. 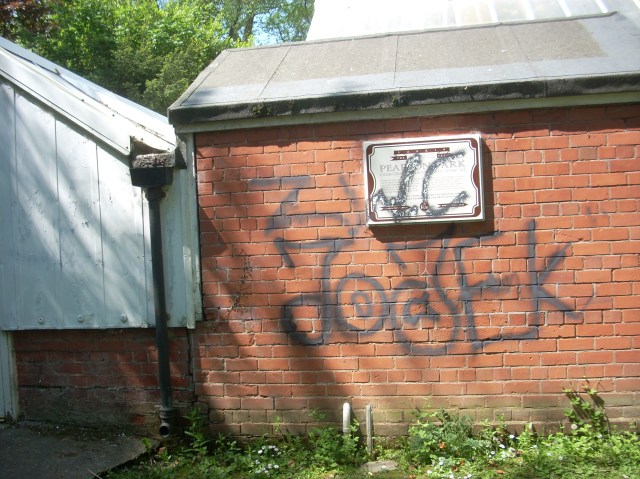 Graffiti got in my way.

I wasn’t able to find the apartment at Pearson Park, but I was able to find Larkin’s later home, the house he reluctantly purchased after vacating the Pearson Park apartment. Across the street from the University of Hull, there is a sign at the intersection of the main road and the street where Larkin once lived.

the corner of Newland Park and Cottingham Road

The map for the Larkin Trail didn’t mark the specific house, but the sign noted the address. I don’t believe I will ever forget how I felt walking along Newland Park, looking for Larkin’s former home.  I can’t seem to put into words exactly how I felt or even why I felt it , but I can only say that it was indeed special.

It seemed like I was walking much farther than I really was. I think that’s because the road curved a bit and also because of the anticipation. I kept looking at the house numbers, trying to see how close I was—and then that feeling of victory when I got there. If I had any doubt that it was the right house, it disappeared when I saw a tiny plaque confirming Larkin had once lived there and a statue of one of his toads sitting on the porch.

where Larkin once lived

…and then turned it to my right…

…and thought to myself, “This is what Philip Larkin saw when he left his house each day.” Perhaps it’s a silly thing to think or care about, but I might have been a little caught up in the moment and how perfect the day felt.

I saw where Philip Larkin lived, worked and played, and I also saw where he died. Larkin passed away on December 2, 1985, from oesophageal cancer in the Nuffield Hospital, now the Westbourne Dental Centre. 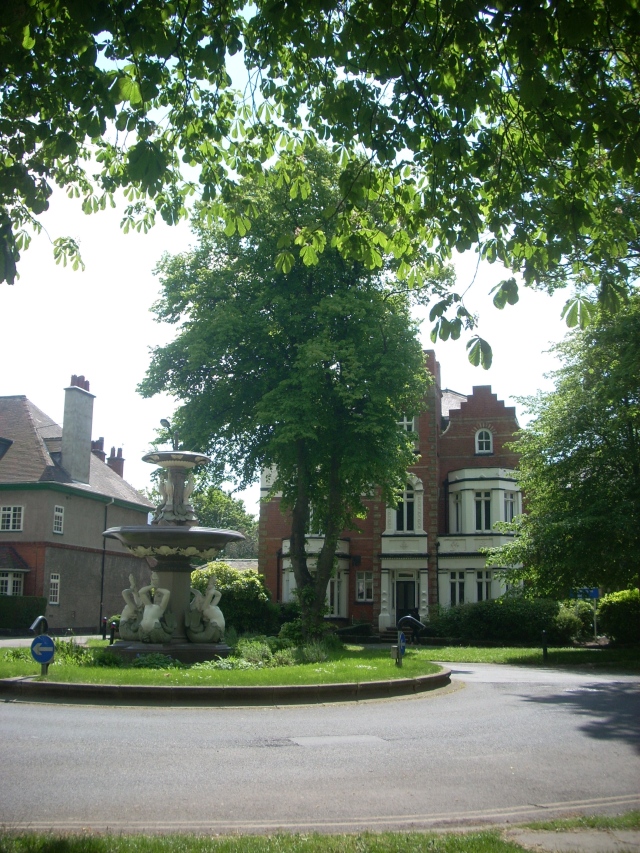 Nuffield Hospital from across the roundabout

I spent a second night in Hull, then took the train back to London the next day. While we made our way toward the capital, I thought of Larkin making this same trip, which he had taken many times. One trip in particular is immortalized in his poem “The Whitsun Weddings.” When I was planning this trip, I hadn’t realized I was going around the time of the 50th anniversary of the poem. In fact, just two weeks after I left, the poem was acted out on the same train I had been on, departing from the same platform I had departed from. The video below shows a bit of it.

I wasn’t there for that performance, but it makes me happy to know that things like that exist, that other people feel the same closeness to the poetry that I do.

a line from “High Windows” on the floor of Paragon station