I acquired many of my books in a similar fashion: I bought them from a bookstore, either on a whim or as a planned purchase. But whenever I look through my books, I realize that some are special to me not solely because of their content, but also because of the memory of how they landed on my bookshelves. Here are a few stories behind the how I came into some of my books.

I like going to readings, but most of the time I go to see writers I already admire. But every now and then, I go and see writers I’ve never heard of, and sometimes end up discovering someone I really like. This was the case with Linda Besner. I saw her read at Harbourfront Centre a couple of years ago, and enjoyed her poetry so much that I bought a copy of The Id Kid and got Besner to sign it after the reading.

All the Pretty Horses — Cormac McCarthy

Cormac McCarthy’s All the Pretty Horses was one of the books on the docket for an American literature course I took in university. As with most of the books I was required to read, I picked up this copy at the campus bookstore. It was the first Cormac McCarthy book I read, and I liked it quite a bit. But it’s difficult to know if the impression it made on me was the writing itself or if it was because I noticed similarities to my grandfather’s life, as he was a cowboy in the time period the book is set in. When I finished the book, I told my grandfather about it, which opened up a dialogue about some of his other life experiences. I’m not sure I would have heard those stories otherwise.

Earlier this year, I borrowed Lullabies for Little Criminals by Heather O’Neill from the library. I enjoyed it so much that I kind of wanted my own copy, but it didn’t seem practical to go to the bookstore to buy a book I’d just read. When I found a used copy at a book sale a few months later for $1.50, I took it as a sign that it was meant to be mine.

While in university, many of my professors recommended A Glossary of Literary Terms, but it was never a required text for any of my courses. The number of recommendations made me curious, and I decided I needed to get my hands on it. When I looked for the book online, I learned it was out of print. So I went to eBay—where I often looked for things I wanted to buy in the early 2000s—and I bought a used copy. I ended up citing it in a lot of my English essays, too. I guess those professors really do know what they’re talking about. 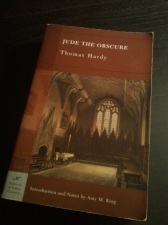 I bought Jude the Obscure at my neighbourhood bookstore, which is not much of a story. The more interesting (and perhaps a little embarrassing) story is why I decided to read this book in the first place. Years ago, I saw an interview with Jude Law on a late-night talk show. Law mentioned he was named after the main character in Hardy’s book, remarking that it was odd for his parents to name their son after a character who has such miserable experiences. And that sounded like a book I wanted to read. So I guess sometimes watching television can lead to reading more books.

A Boy’s Will and North of Boston — Robert Frost

This book was given to me, but I’ve never met the gift-giver. The woman who gave me this book worked with my father when I was a teenager. I suppose my dad mentioned to her that I liked Robert Frost, and she gave him this book to pass on to me. I thought—and still think—that it was a very sweet thing to do. 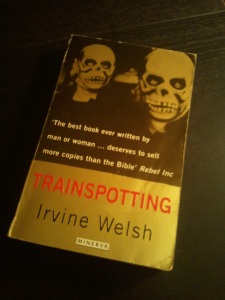 In high school, a friend gave me a copy of Irvine Welsh’s Trainspotting as a Christmas present. When I tried to read it, I had difficulty following because of the Scottish accent the book is written in. I ended up abandoning it, even though I absolutely loved the film. Years later, I realized that if I’d been able to tackle Chaucer, surely I could manage Welsh. I ended up liking the book even more than the film. I’m glad I gave this one a second chance.

I grew up in a house that had a lot of books in it. It wasn’t uncommon for my parents, my brother or me to look through the family-room bookshelves for something to read. But a few of those books didn’t make it back to those shelves and ended up leaving the house when I did. You could say they’re stolen, but I prefer to say they are on extended loan. Besides, the name scribbled on the inside cover of this copy of Poems to Remember belongs to my uncle. Whether he gave it to my parents or whether they stole it before I stole it, I doubt my parents remember (or my uncle, for that matter).

Something that is really fun is when you win books. I haven’t won a lot of contests in my life, but the few times I have won mostly awarded me books. I won my copy of The Chairs Are Where the People Go from The Word on the Street book festival, when they ran a “guess the author” contest on Twitter a couple of years ago.

After looking over my shelves, I’ve realized my book collection needs more found books. If I take a trip to London, maybe I’ll find a book on the tube. It’s possible.

2 thoughts on “How did your bookshelves get so full?”