Philip Larkin is one of my all-time favourite poets. So I’m often reading his poems, or quoting him to other people, or trying to find out more about him. But earlier this week—on March 21, to be exact—I had Larkin on my mind more than usual.

One reason is because of World Poetry Day. I didn’t know it until this year, but March 21 was proclaimed World Poetry Day in 1999. After learning this, I thought about some of the poets I admire the most. 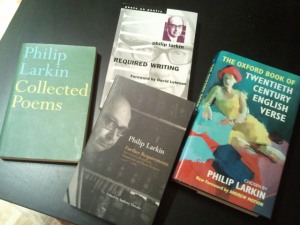 The Philip Larkin section from my bookshelf.

I reread a few of my favourite Larkin poems and reminisced about being in university and first encountering his work. I remember the first poem of his I ever read: “Reasons for Attendance.” It was in an introductory poetry class that all English majors had to take.

I went on to enrol in many other poetry classes throughout university. When school ended, my appreciation for Larkin remained. He’s such a skilled formal poet, and…well, his poetry is just so very English (which is a great thing, if you’re an Anglophile like I am).

But Larkin wasn’t only a poet. He was also a novelist, jazz critic and a librarian. I just recently learned that March 21 is not only World Poetry Day, but it’s also the anniversary of Larkin’s first day as a librarian at the University of Hull (he began there in 1955). So from now I’ll probably (quietly) celebrate March 21 as Philip Larkin Day.

People have different tastes. I know poetry isn’t for everyone, and I understand that even those who do enjoy it won’t necessarily be Larkin fans. But for those of you who aren’t familiar with him or his work, I wanted to introduce you to him. Maybe you’ll fall in love the same way I did, or (even better) in a way that is all your own.